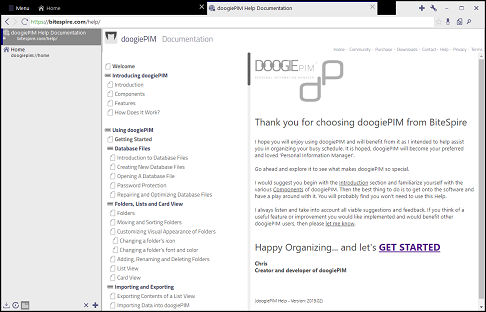 All downloads are free to access and you get an unrestricted 30 days free user licence, to try out all features in full.

Unzip the contents of the required archive to: C:\BiteSpire\doogiePIM2\locales\UI

21 January 2019
77,690 bytes
This file is used as a base to translate and/or customise the user interface nomenclature of doogiePIM
Minimum Requirements: doogiePIM version 2.1.0.5+
This file should be copied then use the duplicate file to edit your new translation.

doogiePIM already comes with an English US dictionary and English Thesaurus. However, you can download further dictionaries in other languages from below.
Installation: copy the downloaded dictionary to the folder where the software is: eg. "C:\BiteSpire\doogiePIM\Dictionaries".

Note: As of this writing, the boxed/CD-ROM product did not include an Addict-compatible file. See the site for details as to how to get a price quote. E-mail stedmans@lww.com for further questions.